Tubetinker, what is your definition of a great patio set up? Does it involve a conventional set of table and chairs? If you close your eyes and picture your dream patio, do you see a hammock?  A coffee table? A DJ booth, some blacklights? A goat yoga station, maybe?

Whether your perfect patio is classic, a little out of the ordinary, or completely eccentric, we can all agree that this outdoor space plays an important role when it comes to enjoying the summer!

Marie-Claude’s  DIY Outdoor Furniture: How it All Began

This story is about Marie-Claude and her family, who used to have a classic patio set-up -a table with 4 chairs-, which did not exactly suit their needs since they wanted to use their patio to relax at the end of the day -ideally on a couch-, have coffee in the morning and grow some plants.

The patio set also was a little big for the space they had -living in the city often means dealing with tiny living environments-, so they had to move the table and chairs around a lot to use the space in different ways. After a while, it started to get a little annoying, so they decided to look for options to organize their patio most effectively!

Creating a DIY Outdoor Couch with an Urban Farming Structure

Because they wanted to add a vertical planter -fresh vegetables, yey!- to their outdoor couch and foot bench station and already knew they had quite the “limited space” challenge to deal with, the family thought building their own outdoor furniture, would help them optimize the space.

Building a DIY patio set up was the only way they could fit a couch, a small table, and a vertical farming structure in their small space! After searching for inspirations and ideas on Pinterest, Marie-Claude found the perfect version of all three elements she wanted on her patio.

She drafted plans for each of them and searched through tinktube’s website to find the best pipes and fittings options for her project!

Once she was sure her online cart was filled with the correct number of tubes and the right types of fittings, Marie-Claude ordered the “ingredients” online… and patiently waited for her purchase to arrive!

A few days later: cutting the tubes & assembling the parts

With a little help from her children and her dad, who was already familiar with tinktube’s products, Marie-Claude got to work as soon as she received her tinktube package in the mail. The main tools she used were the pipe cutter, a level, a mallet and a drill to build the project.

Get free plans and exclusive offers!

Get the latest free plans, members only offers, free support, tutorials and inspirations right in your inbox!

Once they organized their work station, they cut the tubes according to the plans they had prepared, making sure they made the most out of every tube to avoid waste. Then they proceeded to assemble the base of the structures.

They used T-Connector HJ-1, and connectors HJ-17, HJ-2, HJ-7, HJ-7A and HJ-90 for the urban planter -interested in the details of this project? Free plans here!– and built the couch using HJ-1, HJ-15, HJ-2, HJ-4, HJ-7 and HJ-90. The couch was the trickiest structure to build since it had to be sturdy enough to support the whole family’s weight. The foot bench or small table was much simpler to put together and only required HJ-1, HJ-15 and HJ-2 connectors.

As soon as the structures were assembled, they moved them into Marie-Claude’s condo for the final touch!

They added the surfaces and bought cushions at IKEA for the couch and the foot-bench / small table. Then they added plants to their vertical farming structure… and the trick was done 😉 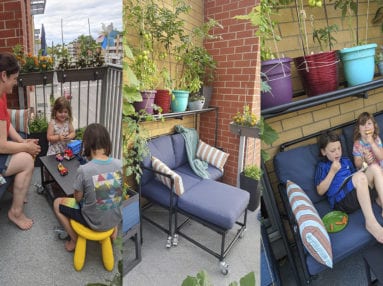 How to build your own outdoor couch

Because outdoor living is becoming increasingly popular, we decided to build an outdoor couch with pipes and fittings. And because the results were so great, we share the plans with you so you can try it out and customize it as you like! 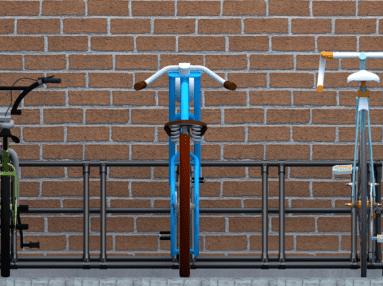 How to build your own bike rack

Any cyclist among you, tubetinkers? Build your own bike rack and customize it however you like!